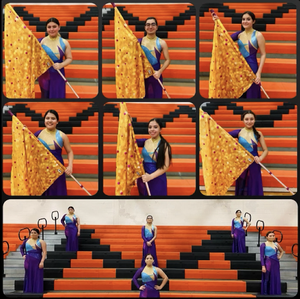 Each year, the Tiger Winterguard competes in a choreographed show that incorporates a blend of dance, flag and rifle equipment to recorded music. Performances are held indoors in gymnasiums, and the floor is covered with a printed tarp that reflects the theme. This year’s show is titled “At Last,” and the show’s music selection is based on the Disney movie “Tangled.”

Members of the team have prepared for these spring performances since January. The first TECA virtual competition was held March 13, where the Tiger Winterguard earned a Superior Rating of straight 1s in all six areas before a panel of judges. The team delivered the same exceptional performance on March 27 and then again on April 10.

In TECA competitions, teams are judged in the areas of movement, vocabulary, skill achievement, program repertoire, composition and performance.

MISD Director of Band & Fine Arts Guy McKinney said, “The Winterguard team prides itself in its precision, technique and creativity. The perfect scores clearly reflect the team’s commitment to excellence.”